Laser Removal of Hard Bumps on Head Scalp by Dr. U

Acne keloidalis nuchae is a condition categorized as folliculitis due to the aggravating factor of ingrown hairs which trigger an immune response, resulting in bumps. However, it differs from other forms of folliculitis due to the tendency of these bumps to resemble keloidal tissue and join together over time. The East Los Angeles patient in the case below consulted Dr. U to get rid of the hard bumps on head scalp and neck areas. They were a source of vexation and embarrassment for several years, and contributed to an overall sense of discomfort around his physical cosmetic appearance. Due to the early stages of the folliculitis, Dr. U was able to recommend laser therapy to get rid of this East Los Angeles patient’s clipper bumps on back of head.

Removing Clipper Bumps on Back of Head – Before Photos

This East Los Angeles patient struggled with bumps on head scalp on the back of the head for over twenty years. He struggled with discomfort including pain, appearance, pus, and blood. He was persuaded to seek specialized hard bumps on head scalp laser treatment by his dermatologist. Oral and topical antibodies, steroids (both topical and injected) had failed as well as other nonsurgical remedies. Thus, he found Dr. Umar’s Los Angeles AKN Bump Clinic and consulted with him about the best treatment for his head lumps. 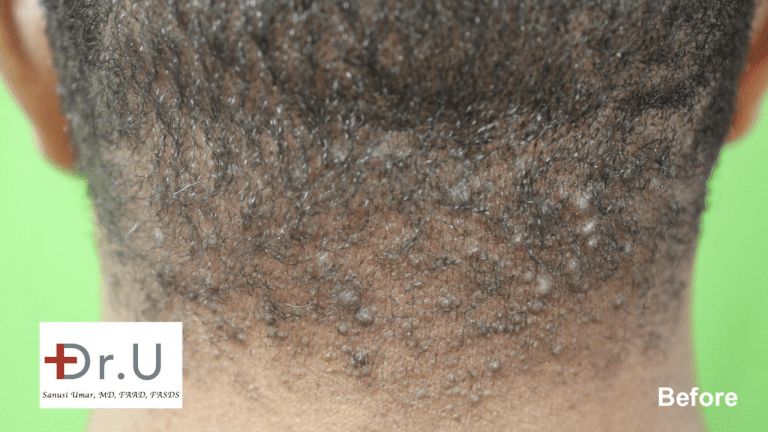 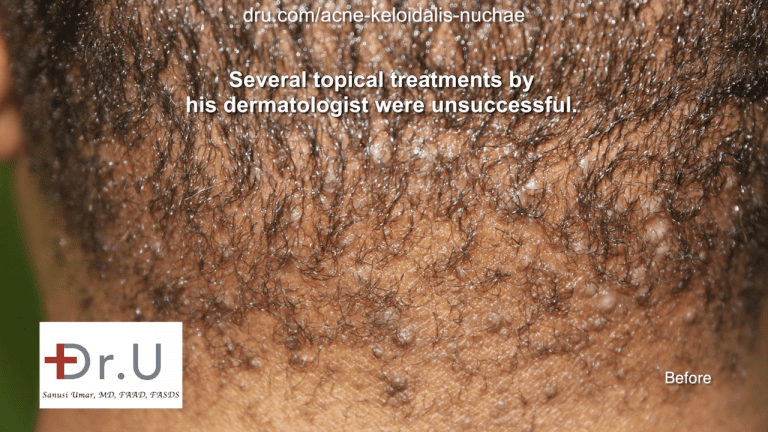 A close-up view of the bumps under hair on the back of the neck. This East Los Angeles patient consulted Dr. U for treatment after various other methods at other clinics had failed.

Treating Clipper Bumps Back of The Head – Procedure Photos

Dr. U began treatment on the East Los Angeles patient’s head and necks bumps after an initial consultation. Since the bumps were still in the early stages of acne keloidalis nuchae development, Dr. Umar decided to use laser therapy to target the bumps. As a pioneer in the treatment and prevention of acne keloidalis nuchae (AKN), Dr. Umar defines its progression using this stages below.

Laser therapy for AKN bumps can require multiple sessions to treat the condition. This acne keloidalis nuchae treatment with laser works by targeting the ingrown hairs with are triggering the inflammatory response that results in the symptomatic bumps. This then allows the bumps to flatten and subside. Dr. U uses the ND:YAG laser to target these problematic hairs. This non-surgical treatment tends to work best in cases in which the ingrown hair is the aggravating issue.

Removing Bumps on Head and Scalp – After Photos

After five treatments the legions had flattened and basically disappeared. Since the hair was affected by the laser treatment on the hard bumps on back of the head and scalp, Dr. U then created a new hairline that started at about ear level. 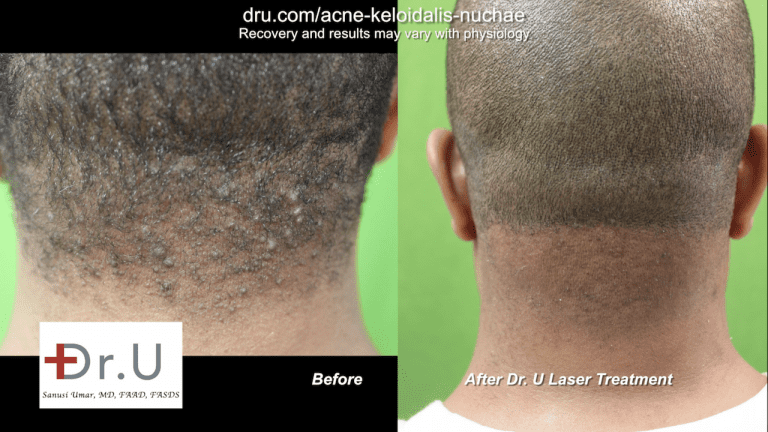 The East Los Angeles patient shows off his new, AKN-free back hairline. No longer self-conscious of the bumps on head scalp, he is able to wear his hair as short as he likes without fear of exposing the hard simple-like bumps previously on his nape.* 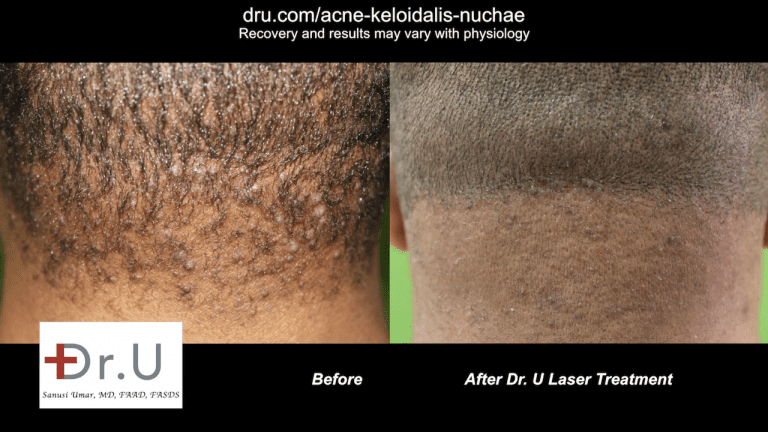 After five laser treatments with Dr. U, this East Los Angeles patient happily reported his bumps were gone.*

Video: Getting Rid of Bumps on My Head Under My Hair

The laser treatment for the hard bumps on head scalp head was successful. The hard bumps on back of the head and scalp appear to have disappeared after 5 treatments. The patient was actually satisfied after the first treatment saying, “Dr. Umar is the man. I wish I had found him earlier.”

After noticing bumps on the back of the head, this patient came to Dr. Umar for treatment. Dr. Umar diagnosed him with Acne Keloidalis Nuchae, as treated his AKN with laser therapy.
AKN 009 00135DRU

What causes bumps on my head under my hair?

Bumps on the head can be symptoms of numerous conditions, it is important to see a physician for a proper diagnosis to determine what the cause of the bumps may be. Acne keloidalis nuchae is an often overlooked condition of folliculitis which may present as pimple-like, hard bumps on head scalp. Many misname it as clipper bumps on back of the head. However, it is important to see a dermatologist for a proper diagnosis in order to determine what the cause of your bumps on head scalp may be.

When removing razor bumps back of head areas are left with scars: true or false?

Laser treatment does not leave linear scarring on the back of the neck. The cosmetic effect of this treatment is a loss of hair in the affected areas, which Dr. U minimizes the appearance of by creating a new posterior hairline. However, Dr. Umar’s unique incision method for surgical AKN bump treatment enables a cosmetically acceptable scar, typically along the back hairline, so that a patient may regain their normal cosmetic appearance.

How can I get rid of hard bumps on head scalp at home?

It is not recommended that individuals pursue home remedies. Rather, it is recommended that you see a dermatologist for the best treatment route for you.  Once AKN bumps progress past a certain stage, typically the papular stage, non-surgical methods alone are not viable options for a curative treatment, At that point, an experienced dermatologist may recommend surgical removal of the AKN mass of lumps and bumps.

If you have more questions, we encourage you to use the button below to ask Dr. U.

See how a New York patient found a cure for his long-suffering AKN head lumps.

Watch this Chicago patient’s transformation after his AKN removal surgery with Dr. U.