Birthmark Removal Services Los Angeles: Birthmarks can be unsightly, causing embarrassment and shame. Thanks to birthmark removal, those with birthmarks can move into a state of feeling beautiful and confident. Certain types of birthmarks go away or fade when children get older. Others stay the same or get bigger, darker, or thicker. 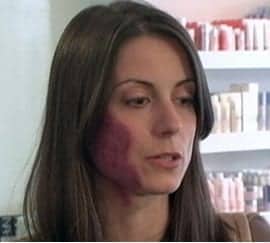 This woman is an example of how birthmarks can be present in unwanted places.*

Birthmarks are a benign irregularity on the skin which is present at birth or appears shortly after birth, usually in the first month. They can occur anywhere on the skin and can be any size, shape or colors. There are two main categories of birthmarks: vascular and pigmented birthmark. Vascular birthmarks are red; they are caused by a malformation of blood vessels and appear when the underlying blood vessels are either too wide or too numerous. They vary in visual characteristics. Pigmented birthmarks are caused by an excess of melanin. There are a few different types as well.

While the exact cause of why birthmarks appear is still unknown, birthmarks that are vascular aren’t hereditary. Certain rapid growth of tissue and proliferates are other causes of birthmarks. Some examples are:

The majority of birthmarks are not harmful, being more of a cosmetic issue than a medical one. However, birthmarks that suddenly manifest can be a sign of more serious medical issues. If this is the case, you should consult with your doctor.

There are three types of birthmarks that can be categorized:

Typically, a birthmark that is pigmented tends to appear tan or sometimes a darker brown color. These colors are not the only ones birthmarks appear in. They also come in colors such as:

Birthmarks that are pigmented are the results of melanocytes. Melanocyte cells are special cells that create a pigment in the skin known as melanin. Usually it is distributed evenly but other times it can group together. Regular types are:

Like the name suggest birthmarks of this type are a lighter brown in color. These birthmarks can be present at birth. They can also start developing early in childhood. Cafe Au Lait birthmarks removal requires assistance from a physician, considering they don’t fade as time passes.

Moles appear as small dots or spots that are dark in color on someone’s skin. Known specifically as conngential nevus. They can raised or flat. Coloration will depend on a person’s skin tone. If a patient has lighter skin their mole may be a lighter brown color.

Turkey
Native American
East African
East Asia
These kinds of birthmarks can appear after birth or before. The birthmark can develop during an infants first month.

These kinds of birthmarks develop due to blood vessels overgrowing in a given area. This tends to make them a reddish color. Typical kinds are:

The medical term for Stroke Bites is nevus flammeus nuchae. “Salmon Bite”, and “Angel Kiss” are common associated nicknames for these kinds of birthmarks.

Almost half the babies that are born are born with Stork Bites. They are usually pink and tan like color, they’re also usually irregularly shaped and are normally flat. Areas the where they are typically found on the body are:

These kinds of birthmarks also go by the name of nevus flammeus. This kind of birthmark appears on 0.3 percent of people both men and women. The wine stain birthmark is a reddish or pink color. The boundaries of this birthmark tends to be irregular.

These kinds of birthmarks are usually apparent on babies. The proliferation of endothelial cells that line the walls of blood vessels, occurs with this birthmark. Normally they are visible in the first couple of weeks after birth, they usually disappear by the time someone turns ten years of age.

If you have a question about birthmark removal services, do not hesitate to Ask Dr. U at no cost.

When it comes to birthmark removal, Fraxel lasers are best for treating pigment. The melanocyte cells in the body absorb the energy’s wavelength. After these structures are destroyed by the heat from the laser and the tissue turns to waste and is carried off by the removal system in the body.

With the Q-Switched lasers, the laser has maximum impact when emitting the beam due to it’s rapid switching on and off. It targets melanin pigment specifically, breaking it down so that it can be carried out of the body through the lymphatic system. This is also another good option for birthmark removal.
Vascular birthmark treatment can addressed with these kinds of lasers when the it gets rid of blood vessels that cause them. A good example of that would be the Vbeam laser that can also be applied to remove unwanted blood vessels contributing to vascular birthmarks. An example would include the use of micropulse technology and 595nm wavelengths to take care things with emitted heat that’s gentle using Vbeam. Along with birthmark removal, the Vbeam is great getting rid of other types of discoloration in the because of blood vessels and pigmentation like:

Other kinds of Q- switched lasers for birthmark treatment are:

During birthmark treatment, a Pulsed Dye laser will cause the blood vessels are shut off; this is done without disturbing any tissue around it. After this process the tissue that has been shut off degenerates and gets carried off by the body.

In terms of specific types of birthmarks, this kind of laser is standard for getting rid of Hermangiomas and Port Wine Stains. It can take any where from three to six procedures achieve maximum results from birthmark treatment. Eight to twelve treatments are expected in order to remove vascular birthmarks.

Before and After Birthmark Removal Services Los Angeles 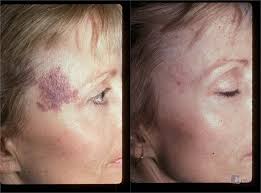 Before and after photo of a woman who received facial birthmark removal.*

Turning to birthmark removal, this patient was able to greatly reduce the appearance of her facial birthmark. 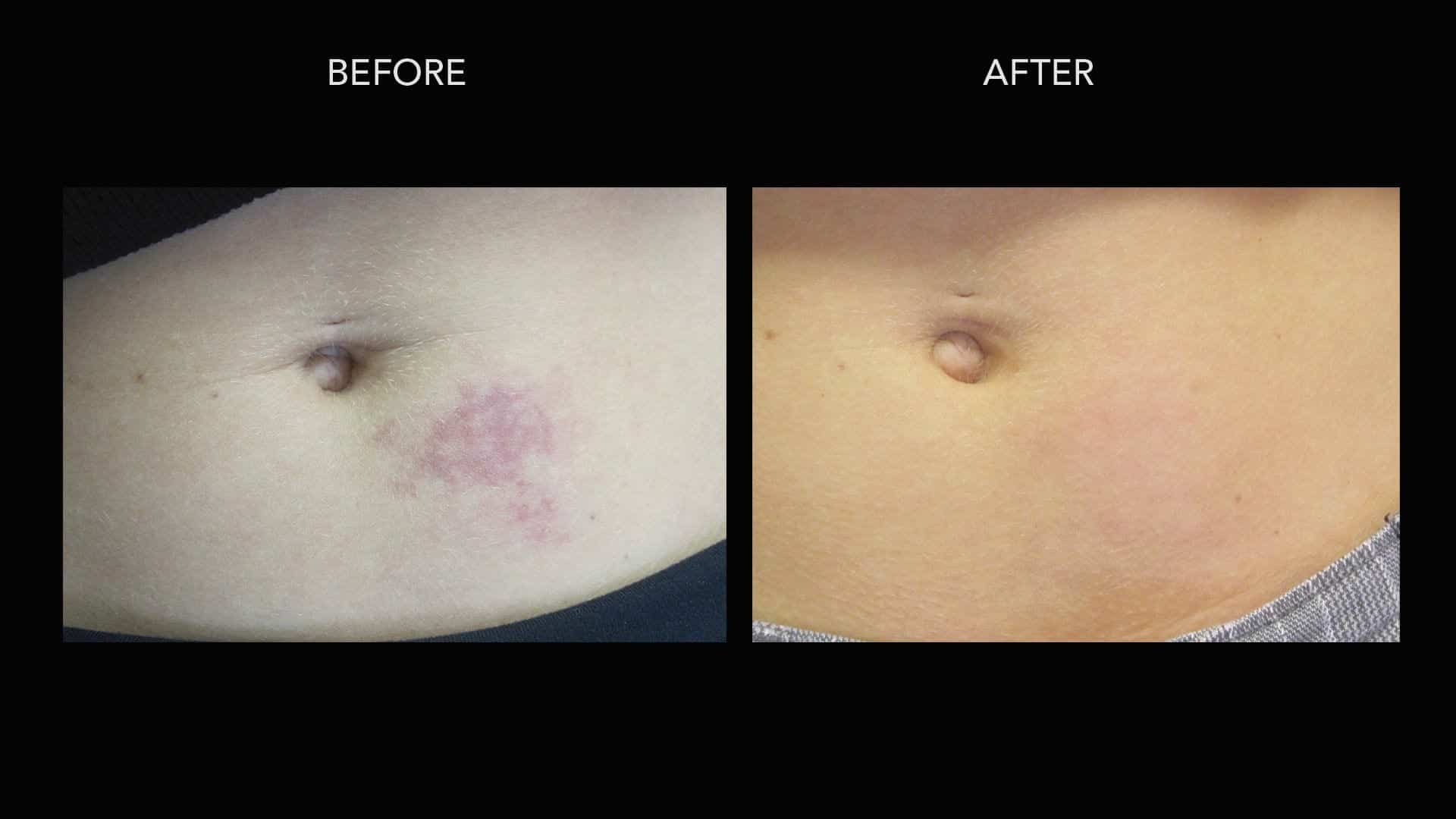 Before and after photo of a patient who received birthmark treatment on her stomach.*

Turning to birthmark treatment, this patient was able to greatly reduce the appearance of her stomach birthmark.

As a result of asian skin being highly sensitive to heat, patients run the risk of hyper-pigmentation. This can occur through improperly chosen devices and poor administration of laser treatment. Following a consultation, Dr. U is able to tell you which specialized laser will be best for your skin. Laser technology is great for birthmark treatment due to its multifaceted capabilities.

When children have larger birthmarks they can feel a bit self-conscious; this is especially true if they are singled out or made fun of by their peers. Birthmark removal procedures can help these children feel more confident and raise their self esteem. Even though lasers are very effective procedure for birthmark removal, there are many parents who worry about the issue of safety. Using lasers for birthmark treatment reduces the risk having side effects because lasers use concentrated light energy. Thanks to milder settings, the child can undergo birthmark treatment without any worries.

There are many kinds of skin benefits when using the IPL. This kind of therapy uses multiple kinds of wavelengths. This helps to improve a number of skin issues, including birthmark removal. Laser treatment is a more focused and predictable compare to IPL due to the fact that it has multiple types of wavelengths. This makes it harder to know how many treatments are needed or know the outcome of this kind of treatment.

Dr. U Skin Clinic offers consultations for free in Los Angeles to remove unwanted birthmarks. We will evaluate your birthmarks ad talk about what treatment options may be best for you. To get started, fill out our consultation form or call us at 1800-499-DRUCLINIC (3782) to schedule an appointment.

When should you have a birthmark removed?

People turn to birthmark removal for both cosmetic and medical reasons. If your birthmark is not a medical issue, you can choose to leave it or venture down the path of birthmark treatment. While some choose to see birthmarks as beauty marks, others find them unsightly. When this occurs, it is best to find a dermatologist who offers birthmark treatment.

What are some myths about birthmarks?

There are many myths about birthmarks and vary depending on culture. Some of these include:

– Italians, as well as those from Spain and some parts of the Arab world believe that birthmarks represent unfulfilled wishes of the mother while pregnant.

– There are also darker interpretations of birthmarks. Some believe they are a bad omen, which results in having marked individuals cast out of society.

– Some say if a pregnant mother touches her body in the same spot regularly while walking, the child will be born with a birthmark in that exact spot.

– Some birthmark myths revolve around food colors. For instance, if the baby is born with a red birthmark, it is allegedly because the mother wanted to eat red food during her pregnancy.

– According to the Chinese culture, if the mark is on your right foot, you are adventurous and if it’s on the left foot, you are extremely intelligent. Birthmarks on the stomach means you are greedy and self-centered.

Can a birthmark appear after birth?

Yes. While many birthmarks appear at birth, some can be acquired as they age.

What should I expect when it comes to birthmark removal cost?

The cost of birthmark removal depends on a number of factors. Your dermatologist will determine whether or not your birthmark can be treated with a laser. If this is possible, they will then determine which type of laser is needed, as well as the number of treatments needed to fully remove the birthmark. With that said, laser birthmark removal treatments generally range from $200 – $600 per treatment and vary primarily depending on the size and time associated with treatment.

Most patients report that there is slight discomfort during birthmark treatment. However, it is manageable.

Just because you were born with it, doesn’t mean you have to live with it forever. To ask Dr. U any additional questions about birthmark removal, click the button below:

Click here for a more general overview of birthmarks.

Read about a different type of mark that can occur on the face.